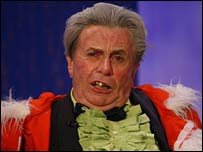 David kindly sent in scans of two newspaper clippings which are now on the articles page. Also an audio interview with Sir Les by fellow Australian Clive James is now on the media page.

Another YouTube clip of Sir Les was added to the media page during the week taken from The Dame Edna Experience DVD.

A Sir Les Patterson Google Group has now been set-up so that fans can discuss the life, the work and the sartorial elegance of the great man. There is also a files section so that members can upload any rare pictures that they may have. Currently there are only two members. There must be more fans of Sir Les out there!

The photograph of Sir Les is from an article on the BBC web-site which reports on Barry Humphries being honoured the CBE. If only they could spell our heroes name correctly.