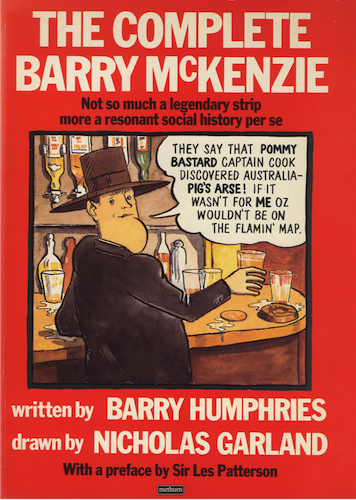 I wasn’t always Australia’s most high-profiled elder Statesman. Back in the sixties I done a stint with the Department of Customs and Excise (Literature Division): I guess I was the only bastard in the outfit who could read. I’ll never forget the day Barry McKenzie lobbed onto my in-tray. It was a Private Eye publication and since Private Eye was banned in Australia at the time for gratuitous smut and uncalled-for lingo, I decided to take Bazza’s adventures into the toilet with me for a swift perusal during my mid-morning crap. Sure enough, it was bloody disgusting and written by a long-haired Melbourne ex-pat called Brian Humphry, who was already on our blacklist for tipping the bucket on his superlative homeland for an easy quid. I was so appalled by what I read that I put most of the book behind me as quickly as possible before flushing it down the big white telephone. ‘If that is the impression the Poms have got of young Australian manhood the bloke responsible deserves to be strung up by the pills,’ I reflected, taking pull on the nearest thing that came to hand. It happened to be a hipflask of Black Label. Me and the lads banned it immediately and I was that angry I even rang up my brother-in-law Brenden in the Taxation Department and told him to give that bastard Brian Humphry buggery.

Times have changed, I suppose, and the permissive society has even penetrated the Australian Cultural Scene, which is, let’s face it, largely run by pillow biters and raving mattress munchers. Even a man like me who would never tell an off-colour yarn in front of the womenfolk - an old-fashioned family man who still believes that his nation’s international image ought to be squeaky-clean - has had to bow to the Winds of Change. I guess this book wouldn’t fool overseas readers in this day and age. Ambassadors like Rupert Murdoch, Joanie Sutherland, little Livie Newton, Paul Hogan, Clive Germs, and me have demonstrated to the world that real Australians can be intellectual, nicely spoken and cultured without necessarily drilling for Vegemite.*

Clued-up readers will be quick to discern in the forgoing pages a crude and anachronistic fuckin' travesty of an Australia that never existed, thank Christ. This book has lost all power to hurt us or stem the tide of tourists, without whom our economy would be down the gurgler. McKenzie do your worst!

* An obscure Australian usage unknown to us. (The Publisher) 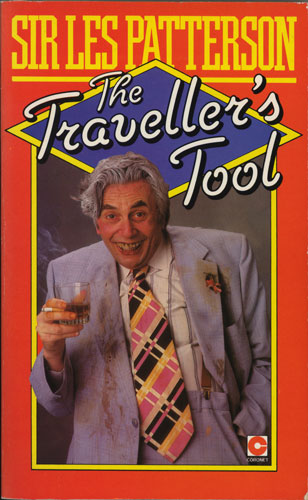 Wit, sage, raconteur, late Cultural Attaché to the Court of St James; Sir Les Patterson is these - and many more. Millions of people around the world have enjoyed Sir Les’s stage appearances with Dame Edna Everage and men everywhere hope to emulate his raunchy, no-holds-barred life-style. In this book, Sir Les shows you how.

Packed with advice on all the most important features of a man’s man’s life-style, the topics covered include drinking (“I’ve got full on everything in the alcoholic alphabet from Advocaat to Zambucca, no worries”) and sex (how to keep the wife off the scent - usually using the invaluable Les’s Blue Guide to hot-spots around the globe). There is also a section on The Australian Tongue - How and Where to Use It which is also a guide to contemporary Oz-speak from Abo to Zipper-Ripper. A large appendage at the back provides jokes for every occasion and Sir Les’s all purpose speech is just the ticket for any situation.

I’m a man’s man and I call a spade a spade, so if you’re a blue-nosed wowzer, a raving pillow-biter or a loony old lezzo with a face like a half-sucked mango, I’d chuck this book away now because in the pages that follow I employ the direct, no-holds-barred lingo of a serious Australian diplomat at the top of his profession and the height of his sexual powers.

The Travellers Tool is the state-of-the-art guide for the modern man on the move - don’t leave home without it. 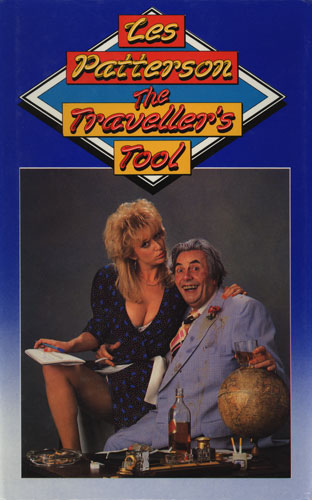 When Sir Les Patterson at last agreed to wet his nib and set down on paper his guide for the modern man on the move he made his intention very clear:

I’m a man’s man and I call a spade a spade, so if you’re a blue-nosed wowzer, a raving pillow-biter or a loony old lezzo with a face like a half-sucked mango, I’d chuck this book away now because in the pages that follow I employ the direct, no-holds-barred lingo of a serious Australian diplomat at the top of his profession and the height of his sexual powers.

In The Traveller’s Tool Australia’s most articulate high-flyer lays bare the international life-style as he has lived it. The book is not only packed with practical advice, but is also, in Sir Les’s own words, ‘as funny as buggery’.

Sex Down Under - What a Red-Blooded Bloke Might Come Up Against is a self-explanatory chapter title typical of Sir Les’s state-of-the-art approach to matters that the majority of readers will have in hand as they fondle the raunchy reading material.

The book includes advice on drinking (“I’ve got full on everything in the alcoholic alphabet from Advocaat to Zambucca, no worries”) and some tips for the married man (how to keep the wife off the scent). Sir Les’s Blue Guide to his favourite hot-spots around the globe will fill a gap felt by every randy, high-profile world traveller and Sexual Abuse in the Work-place - A Buyer’s Guide examines one of today’s burning social issues.

The Australian Tongue - How and Where to Use It is a guide to contemporary Oz-speak from Abo to Zipper-ripper for visitors to Sir Les’s beloved, wide-brown continent. Readers will find a large appendage at the back of the book which includes jokes for every occasion and Sir Les’s all purpose speech which will stand on in good stead whether accepting the Americas Cup or categorically denying scurrilous, tasteless and baseless allegations of corruption at the highest level.

The Traveller’s Tool is an up-market man’s man’s manual which will find its place next to the Nivea on every executive’s bedside table.

Wit, sage, raconteur, late Cultural Attaché to the Court of St James; Sir Les Patterson is all these - and more. Millions of people around the world have enjoyed Sir Les’s stage and television appearances with Dame Edna Everage and men everywhere hope to emulate his raunchy, no-holds-barred life-style. Sir Les Patterson is a career diplomat whose present role as Chairperson of the Australian Chapter of the International Cheese Board takes him all over the globe. He and Lady Patterson (former hand model, Gwen Dolan) have two children, Craig and Karen. 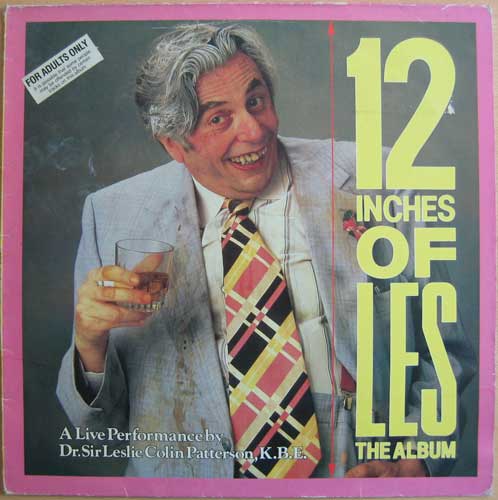 Attention music lovers everywhere. Les Patterson, the thinking man’s Leonard Cohen, has laid down twelve inches of hot tracks including, “Give Her One For Christmas”, “My Motel Mini-Bar” and “Never Trust A Man Who Doesn’t Drink”. 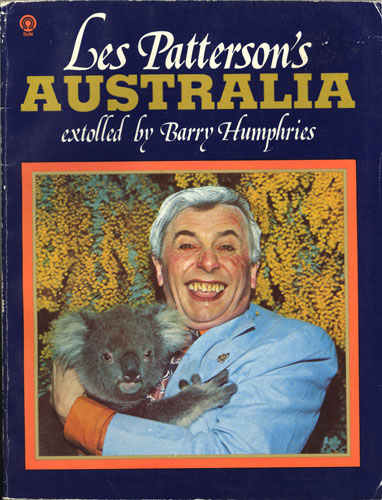 Share Sir Leslie’s own heartwarming love affair with Australia with your loved ones and overseas associates.

This sumptuous volume of beautiful words and pictures recording Australia’s unique heritage comes from the private archive of a great Australian.

Men envy him, women adore him. Wherever you stand in the spectrum of world politics his is arguably the most dynamic and creative mind in Australasia.

This book has been published thanks to the generous munificence of the Creative Literature Board of the Australia Council for the Yartz.

A Foreward by Sir Leslie

In my career as a distinguished fellow-Australian and Public Servant (I have sometimes logged as many as twenty-five, twenty-six, and even twenty-seven working hours per week!) I have always been desirous of keeping a pretty low profile in terms of the hard-nosed cut and thrust of Australian diplomacy situations. Over the years my critics, as such, have grudgingly admired the way I have combined my idealism with an on-going career amidst the pitfalls of the Australian political spectrum situation as we know it, per se.

Under the Whitlam epoch when I held the very important portfolio of Minister for Drought, I too, like many of my countrymen, believed in Camelot built upon this brown unpleasant land of Australia, as they say in the Classics. I too believed that the sun shone out of Gough’s freckle but, like so many of my colleagues, in close proximity to that on-going, open-ended orifice, I soon discovered that sunshine was not the only commodity that was likely to strike you fair and square between the eyeballs.

As Lady Luck would have it, I came out but lightly scathed, of splashed, and I was soon making myself an indispensable part of Australia’s overseas Public Relations Operation situation in the delightful metropolitan area of London as Australian Cultural Attache to the Court of St James. It was at this particular juncture that I was summoned to Buckminster Castle, the Queen’s delightful colonial-style residence, to receive the title of Sir and Lady, for which I know for a fact so many of my fellow Australians have been working their arses off for. I’m not going to name names: we all know a brown-nose when we see one. I could be referring to any Tom, Dick or even Harry!

But the rest is history.

Many men write their memoirs in the twilight of their lives. But I am happy to say, as I sit down to pen this sumptuous volume that I am still a vigorous man of the people in the Lunch-time of his Life!

I don’t mind saying I love the finer things of life, because I do! Because of this I have often been labelled as a ‘Highbrow’ by types who wouldn’t know a lovely hand-done picture on the wall of a girl with no clothes on featuring the map of Tasmania from a hole in the ground.

Let’s face it, for a while Australia’s image as a land of culture copped a terrific lot of rubbish and knocking from the expatriate sector, mainly a bunch of know-alls and shirt-lifters, who in my humble viewpoint are lower than the basic wage. Now, largely thanks to my goodself, my family and my staff, Australia is second to none in terms of macrame, pomes, opera, modesty, TV, and aboriginal artifacts. Not forgetting our internationally acclaimed, award-winning, world-class, home-grown fillum industry, which I have largely spearheaded.

If you ask me what I’m proud of, more than anything else I’d say it in one word - TRACK-RECORD.

Although I say it myself - mine’s a beauty.

The rest is history.

Hopefully this sumptuous volume by my goodself will find its way into an in-home library situation, not only in terms of Australia, but also Overseas where interest in our superlative life-style is arguably nil.