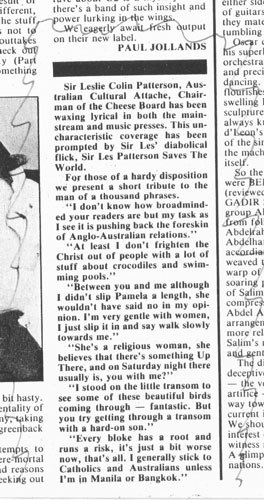 Sir Leslie Colin Patterson, Australian Cultural Attache, Chairman of the Cheese Board has been waxing lyrical in both the mainstream and music presses. This uncharacteristic coverage has been prompted by Sir Les' diabolical flick, Sir Les Patterson Saves The World.

For those of a hardy disposition we present a short tribute to the man of a thousand phrases.

I don’t know how broadminded your readers are but my task as I see it is pushing back the foreskin of Anglo-Australian relations.

At least I don’t frighten the Christ out of people with a lot of stuff about crocodiles and swimming pools.

Between you and me although I didn’t slip Pamela a length, she wouldn’t have said no in my opinion. I’m very gentle with women, I just slip it in and say walk slowly towards me.

She’s a religious woman, she believes that there’s something Up There, and on Saturday night there usually is, you with me?

I stood on the little transom to see some of these beautiful birds coming through - fantastic. But you try getting through a transom with a hard-on son.

Every bloke has a root and runs a risk, it’s just a bit worse now, that’s all. I generally stick to Catholics and Australians unless I’m in Manila or Bangkok.