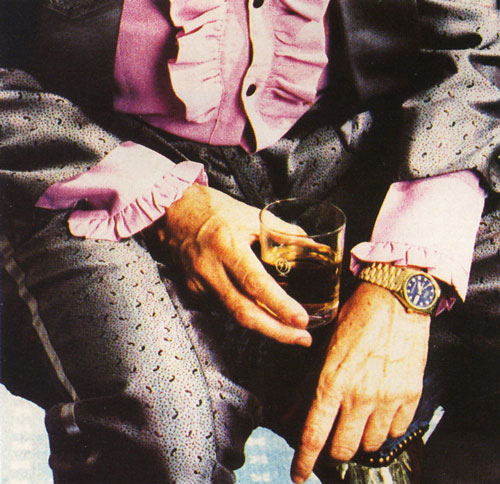 Sir Leslie Colin Patterson, K.C.B., is the most famous Australian in the modern world; a world around which he has travelled tirelessly bearing the Australian standard in his various capacities as the former Cultural Attache to the Court of St. James, the Nobel Prize-winning Ambassador to the United Nations, and Chairman of the Australian Cheese Board.

A troubleshooting diplomat with the bottle to say whatever is on his mind, universally renowned for his patronage of the Yartz and his thorough enjoyment of the opposite sex, Sir Les is a man’s man. His is also a pretty snappy dresser. Over a pre-prandial bucket of Bloody Marys in his modest suite at one of London’s most prestigious hotels, Sir Les elucidated his personal style.

“When you are fronting up for the greatest little country on the face of the planet - ie Oz - you need to be pretty smart in the sartorial department. What would the world at large think of my homeland if its best-known roving ambassador dressed like a hippie? That’s why I’m a suit man and it’s not for nothing that I have logged up numerous nominations for Best Dressed Man at home in Australia.”

Sir Les is dressed as if for a diplomatic cocktail party in an evening suit by Rossini Of Bond St, a minor extravagance for which he is grateful to his old mate the Australian Tax Payer, who foots the bill for his official wardrobe. The restrained opulence of the suit is highlighted by the co-ordinating purple shirt and patent leather platform shoes.

“The platform shoes are de rigeur in the Australian diplomatic community and I like them because in a social situation they enable me to look over the heads of most people, whilst knocking back the free Bucks Fizzes, and to look down the cleavage of any little research assistant, or hornbag, that may be in the offing.

“The ruffled shirt is also an indigenous Australian style. It’s a statement, more than anything else. It says that I know where I’m coming from, even if I don’t know where the hell I’m going.

“I like casual clothes and I do enjoy a splash of colour, but I am representing Oz and I have to dress formally. Besides, I am a bit conservative in my taste. The new flared trousers which are now coming in in Australia are a bit avant garde for my taste. I’m not going in for that yet, because that look might go out and then where would I be? No. I tend to stick with the dignified, classical look, albeit with my own little twist. What you see is what you get with Patterson, although you can’t see the boomerang motif on my Australian Y-fronts; there is no secret. I just have natural style and flair. An old bathrobe looks glamourous on me.” 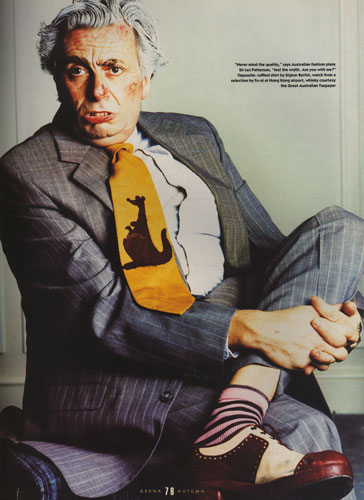 Even when less formally attired in a business suit, Sir Les likes to sport subtle accessories which signal his origins from and patriotic devotion to Down Under. The kangaroo is a very potent symbol in Australia and Sir Les flaunts one, in earthily excremental colours, on a tie that was handcrafted for him by his daughter, Karen. The obligatory platform correspondent shoes are made from genuine dead kangaroo, humanely culled. “I can assure your readers,” Sir Les informs me, gravely, “that this kangaroo did not suffer in the manufacture of my shoes. He felt no pain.” That is not to say, however, that the shoes were specially made. “I’ve got perfectly normal feet, all my extremities are normal. These are stock size in any upmarket Australian shoe shop.”

As an inveterate traveller, always on the go, Sir Les requires his clothes to be both smart and serviceable: “I’ve been to a lot of places and I don’t even know that I’ve been there, that’s how well travelled I am. Sometimes in my job I have to put in a 24, 25, even a 26 hour day and I might be wearing the same outfit for three days on the trot. But if you could see my wife, Gwen, you’d appreciate how much I get out of travel.”

With such a frenetic lifestyle, synthetic fibres make a lot of sense to Sir Les: “I don’t insist on wearing Australian wool, that’s all bullshit. I am loyal to Australian polyester, however, it’s so much more practical. It doesn’t crease! I would put in a good word for wool if they slipped me a quid, what a hypocrite I would be if I said anything else, but I’ll wear drip-dry wherever I can.

“Never mind the quality,” says Australian fashion plate Sir Les Patterson, “feel the width. Are you with me?”

“I only have one or two good suits but, like a lot of us career diplomats, I get cheap copies run up in Hong Kong or Singapore, wherever I happen to be having a compulsory layover. I generally go to Bangkok for a fitting. I get fitted for most things there, although it is sometimes hard to find my size. Those oriental tailors are very good to me, though. The little bloke on his knees with a mouthful of pins, like a shark with jaundice, running the tape up my leg and asking ‘Which side you gless?’ I always tell him, ‘Just make 'em a bit baggy about the knees, son.’”

As well as having duplicate suits, Sir Les has over the years cultivated a crack squad of sympathetic dry cleaners in key cities throughout the civilised world. “I like to discuss my stains with the top man because, let’s face it, it can be pretty embarrassing to point out all your intimate trouble spots in a crowded shop, be they blood or chocolate, banana daquiri or sperm. Generally in my case it’s a mixture of all four. Vindaloo chunder is the worst stain known to man. Incineration is the only answer to that, no worries.”

Although a legendary philanderer, Sir Les is also a deeply home-loving man who is never happier than when he is placing a long distance phone call to his wife. “I am a religious man. I do believe that there is somebody up there and Gwen, my wife, she believes that there is someone up there. And often, in the early days of our marriage, there was.” 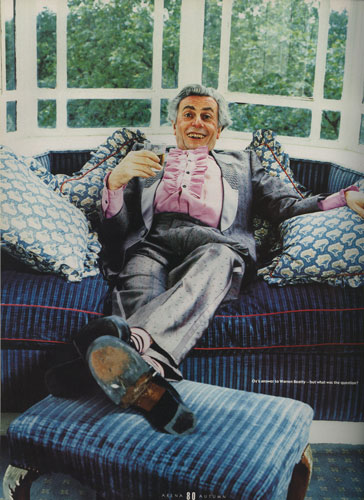 However, as Les would be the first to admit, he is only flesh and blood, a man with virile human needs: “I don’t do any exercise because I’ve seen far too many of my colleagues croak on the squash court or strapped into the Nautilus. The natural exercise is what I go in for, a few lusty pressups with the right kind of gym instructress keeps me straight.

“Let me be quite frank about this, my heart is always with Gwen and the kiddies, wherever my dick might be, but I do love women and they love me. Women are attracted to me because I have a gentleness about me and also, y'know, they like a bit of raunchy talk. Women like to know where they are with a bloke and they can always count on a married man, such as myself, to put the hard word on them before the night is through.

“Let’s face it, I am a romantic and I’ll never deliberately hurt a member of the fairer sex. Well, not after the first time anyway. Usually I just slip in the tip and say, ‘climb aboard, darling.’ I am that bloody considerate and gentle that I have sometimes paid a high price for it, with a busted jar of Vaseline oozing out of my Samsonite.”

Oz’s answer to Warren Beatty - but what was the question?

Fine old cheese, king size mentholated smokes, rare vintages; you name it, Les Patterson is pretty heavily into the finer things of life. As perhaps the leading authority on Australian cheese, he prides himself on a nose so sensitive that he can distinguish between and Ayers Roquefort and a pungent Tasmanian Gorgonzola with the lights off. He is a strong believer in healthy eating and insists on Mother’s Pride baked beans which, he points out, are packed with protein and teach your body to think for itself. He is also an indiscriminate drinker who has got full on every substance in the alcoholic alphabet from Advocat to Zambucca, often in a single session.

“Unlike a lot of my colleagues and peer group, booze has never been a problem for me. My only problem is getting enough of it, because I have to feed this complex organism that is Sir Les. A lot of people say that I drink too much, but actually I suffer from terminal jet lag. I jet about all over the place and I very rarely hit the toilet when I’m tired. People say I spit but, I ask you, what d'you reckon God gave us saliva ducts for? They’re to lubricate the gob for the mastication of food, or giving an air hostess a tongue sandwich, or whatever. Often when I’m up there, y'know, 30,000 feet and eight inches up there, I thank Christ for my saliva because you can get pretty dehydrated. I always carry a tube of lipsalve, too, just in case.” 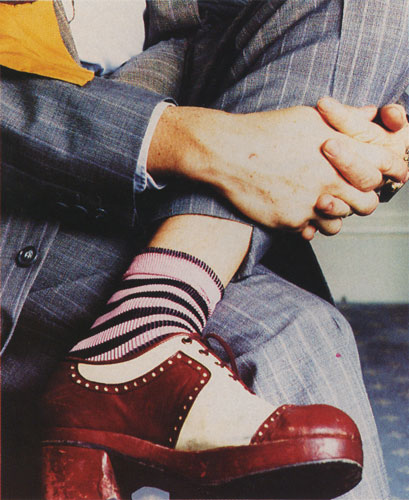 In fact, Sir Les has come in for quite a lot of criticism in his home country, where he is truly a prophet without honour. “I cop a lot of shit from other Australian political figures who are jealous of me because I am the only elder statesman who has had a fillum made about a real incident in his political life. They tried to put the kibosh on this fillum at a very high level and I advise your readers to see it before the Government tries to shut it down.”

Sir Les is of course referring to the controversial new docudrama, Les Patterson Saves The World, an astonishing reconstruction of a series of incredible events which forced Les to team up with Dame Edna Everage in the pursuit of fair play, the Australian way. “It is almost unbelievable, I know,” admits Les, introspectively, “I’ve heard people staggering out of the cinema saying that they can scarcely believe the things I stumbled across. I literally stumbled across them because I was half pissed at the time and I’m not ashamed to admit it. The truth will come out no matter how the establishment tries to hush it up. I have been the victim, like old Peter Wright, of a fuckin' witchhunt. Old Bob Hawke, the PM, is an old mate, and I never suspected the ramifications of my posting to the Middle East, nor that he would be prepared to sacrifice yours truly to further his own political ends. That’s politics for you, it’s a jungle.

Sir Les’s shoes are made from humanely-culled kangaroo leather, and offer a discreet contrast to his understated suit

“Dame Edna, too, acts like she’s got a stick up her arse. She is far too big for her boots these days. She was a nice enough tart at one time, many years ago before she was married, when I took her out once. She seems to have conveniently forgotten that.

“All I want is what’s coming to me, no more than my due. I copped the knighthood, that was a stroke of luck. I did win the Nobel Prize, but that only made page three in the Australian newspapers. My ambition is to follow in the footsteps of Henry Kissinger and become an agent for global harmony. Are you with me?”