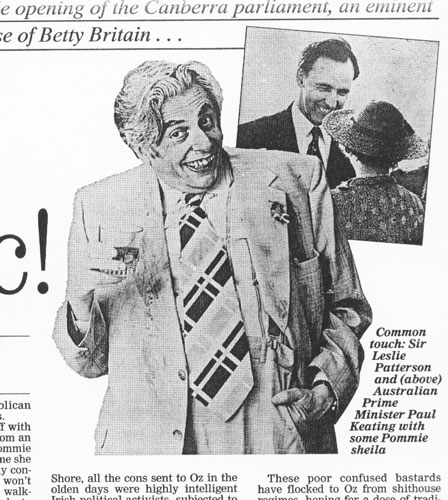 As Australia moves to end the British-style opening of the Canberra parliament, an eminent politician anticipates the inevitable demise of Betty Britain…

I love England. This might shock a few of my hardline political colleagues, but I do. Every now and then, the Poms come up with a bit of legislation that screams common sense and humanity. Look at the civilised kids-in-pubs legislation. What better way is there to teach youngsters how to handle booze than to sit them in pubs for hours watching their parents getting pissed.

That’s how I grew up and no one’s got a more sensible attitude to grog that I have. If it’s in a bottle, drink it, that’s my philosophy.

Many’s the time my dear old Mum - the Lord be good to her - would send me down to the Harp of Erin to collect Dad at closing time. If he wasn’t sleeping peacefully between the bar and the gents, he’d be embroiled in some heated debate with a few other thirsty Australians on the pros and cons of an Aussie republic.

Now I happen to think highly of dear Betty Britain, but the truth is, readers, that I would be a traitor to my Australian heritage, and my cherished religion (Lapsed Mick), if I didn’t endorse Prime Minister Paul Keating’s courageous endeavours to push our wide, brown sub-continent kicking and screaming into the republican family.

Let’s face it, never before in our history has Australia had more in common with Tanzania, Montenegro, Poland, the Philippines, Haiti and the world’s other great republics.

“The sheila on the Aussie five-dollar bill has got a face on her like a half-sucked mango!”

I can now reveal that I’ve been a key member of our Republican Think-Tank for donkey’s years.

Yet far from being pissed off with our efforts at independence from an outmoded and discredited Pommie monarch, the Queen had told me she can’t flamin' wait. She recently confided to me: “Thank Christ I won’t have to go on another of them walk-abouts down under,” or words to that effect. She reckoned that the last time our PM “went the grope” and put his hand up her frock she nearly declared a republic on the spot.

“Will they take me of the money, Les?” she plaintively asked me yesterday. “The sheila on the Aussie five-dollar bill has got a face on her like a half-sucked mango!” Again I paraphrase slightly. The Queen resumed: “She looks like she could do with some hair and glamour tips from my old friend Dame Edna.”

I promised Her Majesty we’d whip her off the currency and the stamps as quick as shit, and replace her delightful but anachronistic visage with some more suitable Irish-Australian icons like Ned Kelly or Kylie Minogue.

“Why didn’t Australia declare a republic yonks ago?” is one of the questions I keep getting. Basically there are two reasons:

As Robert Hughes proved in his seminal publication, The Fatal Shore, all the cons sent to Oz in the olden days were highly intelligent Irish political activists, subjected to sexual molestation in the bush by public-school Pommie poofters. For generations we were actually ashamed of our heritage and, let’s face it, there must have been moments of degradation when our manacled ancestors were forced to think of England, or some uplifting royal personage, while the Brit freckle-punchers did their worst.

Now we’re proud of our convict past and no longer turn our back on it - if you get my drift.

These poor confused bastards have flocked to Oz from shithouse regimes…

Paul Keating told me he couldn’t hold a referendum yet on the republican issue because most Australians - complex and paradoxical bastards that we are - would have voted for the Queen! You see, my superlative homeland is now swarming with Viets, Yugos, Koreans, Tea-towelheads, in fact every ethnic minority you could poke a stick at.

These poor confused bastards have flocked to Oz from shithouse regimes, hoping for a dose of tradition, sanity and stability. For years they’ve dreamed of an English parliamentary democracy in the Pacific, with an occasional state visit from Betty herself.

Imagine their feelings when they arrive in the Promised Land only to find it’s being run by a mob of over-paid Irish ratbags pissing on the Union Jack! That’s why our PM is holding off a referendum on the republic until the next royal scandal breaks.

We’re all very excited about the future. Me and my think-tank are going on a fact-finding mission to Mongolia (all expenses paid) to learn how another republic ticks, and our world-class artists, craftspersons and musicians are working on the new flag, stamps and national anthem. Someone’s come up with an Aboriginal anthem, but nobody can bloody well sing it.

The flag’s easier. Green of course, in homage to the Emerald Isle, and yellow - for bananas. We grow little beauties in our republic!